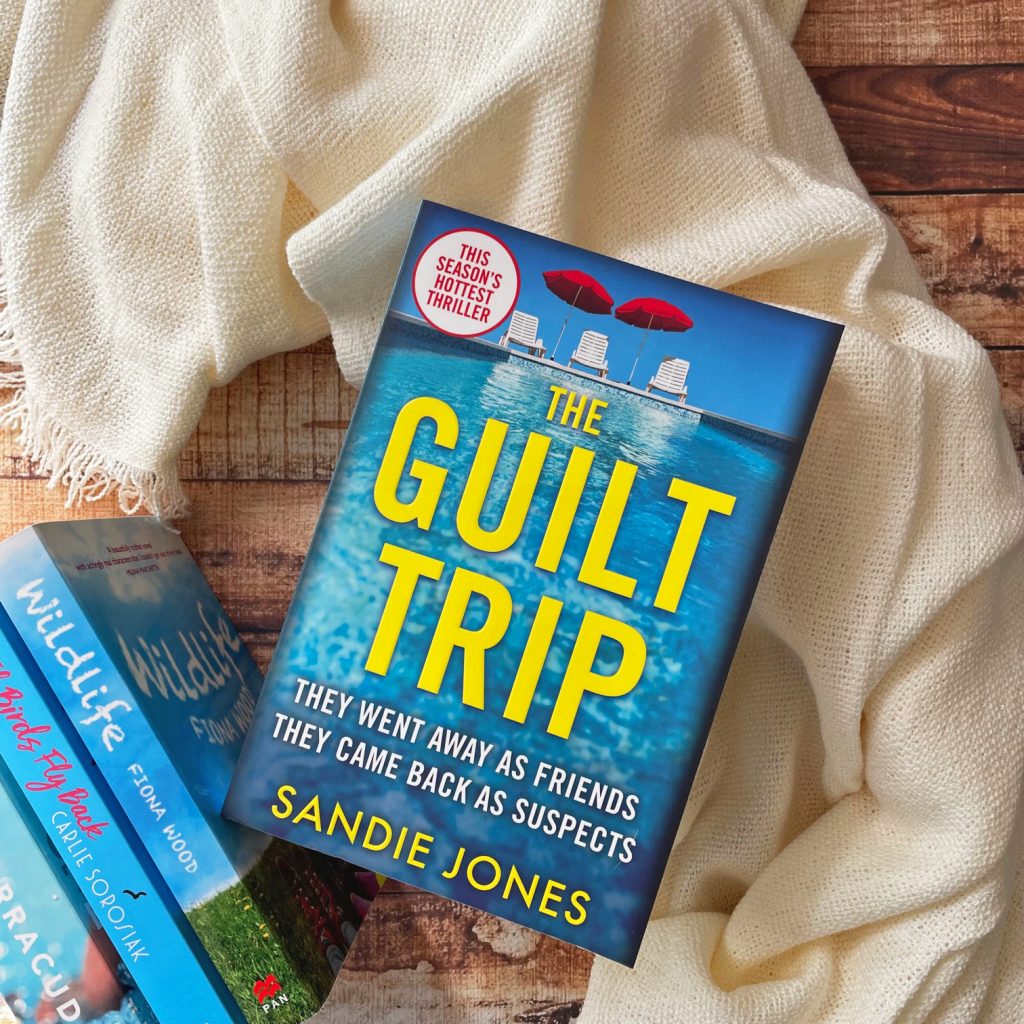 They went away as friends
They came back as suspects . . .

Jack and Rachel. Noah and Paige. Will and Ali. Five friends who’ve known each other for years. And Ali, Will’s new fiancée.

To celebrate the forthcoming wedding, all three couples are having a weekend get-away together in Portugal. It’s a chance to relax and get to know Ali a little better perhaps. A newcomer to their group, she seems perfectly nice and Will seems happy after years of bad choices. But Ali is hiding more than one secret . . .

By the end of the weekend there’ll be one dead body and five people with guilty consciences wondering if they really know each other so well after all. Because one of them has to be the killer…

Sandie Jones’ The Guilt Trip is a domestic thriller set during a weekend get-away in a Portuguese villa for a friend’s glamorous wedding. There are three sets of couples and a long list of secrets between them. By the end of the weekend, someone will be dead and someone will be responsible.

This has to be my favourite Sandie Jones novel so far. The plotting is neater, the mystery more hidden, and the events unfold in a much more realistic manner. The premise is simple yet effective, and the tension between the characters will entice any fan of thrillers.

“The bed is unmade, the sheets tangled, and their pillows still show the indentations of their heads. She lets out a relieved sigh. What the hell was she thinking? How had she allowed a fleeting image, one that she can’t even be sure she saw, to infiltrate her mind and bring about insecurities she never even knew she had?”

Written in third person, the novel centres around protagonist Rachel. No one knows about her short fling with best friend Noah two decades earlier, and it’s important the secret stays a secret. But her husband is acting shady, and no one really likes Will’s fiancé. She’s fleeting and secretive, and far too young for him. But over time, the group will come to learn first impressions aren’t always accurate and it can be the people you least expect who hold the greatest secrets.

Hints are dropped sporadically and carefully, so you’re never really sure what’s going to happen until the drama has unfolded. Chapters end on cliffhangers, encouraging you to keep going. The Guilt Trip is a great holiday or aeroplane read – something to devour in a short amount of time.

“Twenty years have passed, and Noah has no doubt developed a whole heap of idiosyncrasies that she knows nothing about, and enjoyed experiences with Paige that she’ll never have a window onto, yet, for some reason, she stills feels she knows him better than anyone else.”

Despite loving this book, there were a couple of gripes I had. Firstly, it was really hard to keep track of all the characters, even when I was well into the book. I kept getting Noah and Jack mixed up. And when we find out that Jack and Rachel have a son called Josh, I started getting Jack and Josh mixed up. I got backstories confused, and relationships confused. I had to pause a lot to remember who was who before continuing. I’d say it was about the halfway mark before I felt more confident with the character names.

Secondly, people looking for a murder mystery should be warned that the death mentioned in the blurb actually doesn’t happen until the final chapters, so most of the book is about the relationships between these five adults. It is a bit ‘soap opera’ and so won’t be suitable for all readers, but I really enjoyed it.

Thirdly, I found the characterisation of Paige to be a little inconsistent. No spoilers, but once you get to the end and look back, I found her actions and dialogue to be a bit hard to swallow. Was she meant to be a red herring? I found her a little confusing.

“She shakes herself down as the unfamiliar, and wholly unwelcome, thoughts wrap themselves around her psyche. She tells herself that this is merely a knee-jerk reaction to seeing Noah unconscious on the beach today.”

Addictive and entertaining, The Guilt Trip is recommended for readers of domestic thrillers. Readership skews female, 25+